The Gray Whale migration in San Diego has begun! Every year towards the end of November until the beginning of April the amazing Gray Whale can easily be seen off the coast of San Diego. Gray Whales have one of the longest known migration routes of any mammal which cover about 10,000-12,000 miles annually. Gray Whales start their migration after leaving their summer feeding grounds in the Arctic Sea eating mainly benthic crustaceans, which are small creatures living on or near the sea floor. They then head down to the warm waters and protected lagoons in Mexico to breed and calf (give birth) their young.

Gray whales are between 16ft for newborns and young whales all the way to 43-49ft for full grown adults. Mature gray whales can reach up to 40 tons but typically range between 17-33 tons. They can easily be seen by boat by looking at the horizon for their distinctive short heart-shaped spout caused by their 2 blow holes. Generally they swin in a pattern making it easy to spot them and follow their course. They will generally do a series of 3-5 short dives where the whales go under the very surface of the water for a minute or less before coming up for a breath. During this time their “footprint” can be seen and followed created by their fluke disturbing the water looking like a big bubble or boil on the surface. After a series of short dives and breaths, they will generally deep dive for 5-10 minutes. Many times just before beginning a deep dive the whales will raise their fluke above the water before descending down. 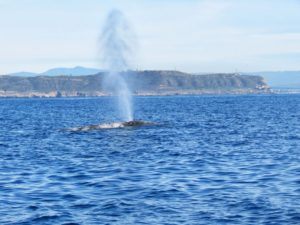 Finding whales off the coast of San Diego this time of year can be easy for any boat owner of any skill level. To view these beautiful creatures during their annual migration simply leave San Diego Bay heading south past Point Loma through the channel. Head out around 2-3 miles, all the while scanning the horizon for their distinctive spouts. The last channel marker on the way out the channel that chimes is called “Whistler” and is a good spot to head to in order to find whales. Generally in the early season, whales traveling in pods of 2-5 will be headed southbound until around late December and early January. After early January generally the whales are moving Northbound and might be a little further out in the 3-6 mile range. Gray whales travel between 4-6kts so following them is easy on most powerboats and sailboats. Please stay 100 yards from the whales as to not distress them however they have been known to be curious and come within a few feet of your boat on their own.

If you are interested in Private Whale Watching tours or have any questions don’t hesitate to call at 858.633.6520.